The forest and the journey to the south

Heading towards the Bocca di Verdi (Col de Verde), one of Corsica’s 4 “great passes” together with the col de Vergio, Vizzavona and Bavella. This pass is located at 1,289 metres and as we’re here in Ghisoni at 650 metres, we’re going to have to double our efforts.

There are 17 kilometres between us and the pass but the profile is relatively flat over the first 10, meaning it’s perfect for warming up and very pleasant, particularly in the national forest of Marmanu (2,200 ha). This forest is very typical of high altitude Corsican forests with a variety of landscapes and preserved plant species.

The climb is a little harder for the next seven kilometres with portions up to 12%, but paradoxically, it feels easier than the col de Croce to get up to Vezzani through Noceta!

Between the beech trees and the Corsican pines, we catch a glimpse, from time to time, of the peaks of the mountain range before us.

The road is quiet and peaceful without many cars (we pass only 3, travelling on an August day around 10am).

On the pass, the relais San Petru Di Verde can serve you drinks, lunch or even put you up for the night (they offer chalets, camping and hot showers). Like Calenzana and the col de Vergio, the col de Verde is a point of intersection between the GR20 and the GT20.

Be sure to note that the descent through the forest is always cool, even in August and I’m glad to be able to put on my (sleeveless) windbreaker. But be careful in spring and make sure you cover up.

The descent is long and ends at Cuzza (Cozzano), high in the Taravo valley, which gets its name (meaning “corner”), from the fact that it is surrounded by neighbouring villages (Palneca, Ciammanacce, Zevaco to name a few), and by peaks such as the “Punta di l’Usciolu” (1,815m), the crête “d’Acqua d’Acelli” (1,910m) and “Monte Furmicula” (1,985m).

The village is home to the U Mondu di u Porcu (Pig Museum), a place dedicated to the know-how of the Tàravu valley: livestock farming and pork processing. Should you wish to try some Corsican charcuterie in the area, you will know where it comes from...

The shaded road extends on and there are 4 more kilometres of climbing before we reach Zicavu (Zicavo).

Zicavu, once one of southern Corsica’s most significant villages, located near the superb Incudine forest, is a village brimming with character and home to a number of old granite houses.

Not far away are the bergeries de Bassetta through which the GR20 passes and from which you can access the Plateau du Cuscionu (which is also accessible via Quenza).

We decide to stop for lunch. We have a lovely lunch at a little restaurant called A Funtana on a very pleasant shaded terrace. The menu is simple, offering traditional family cuisine. 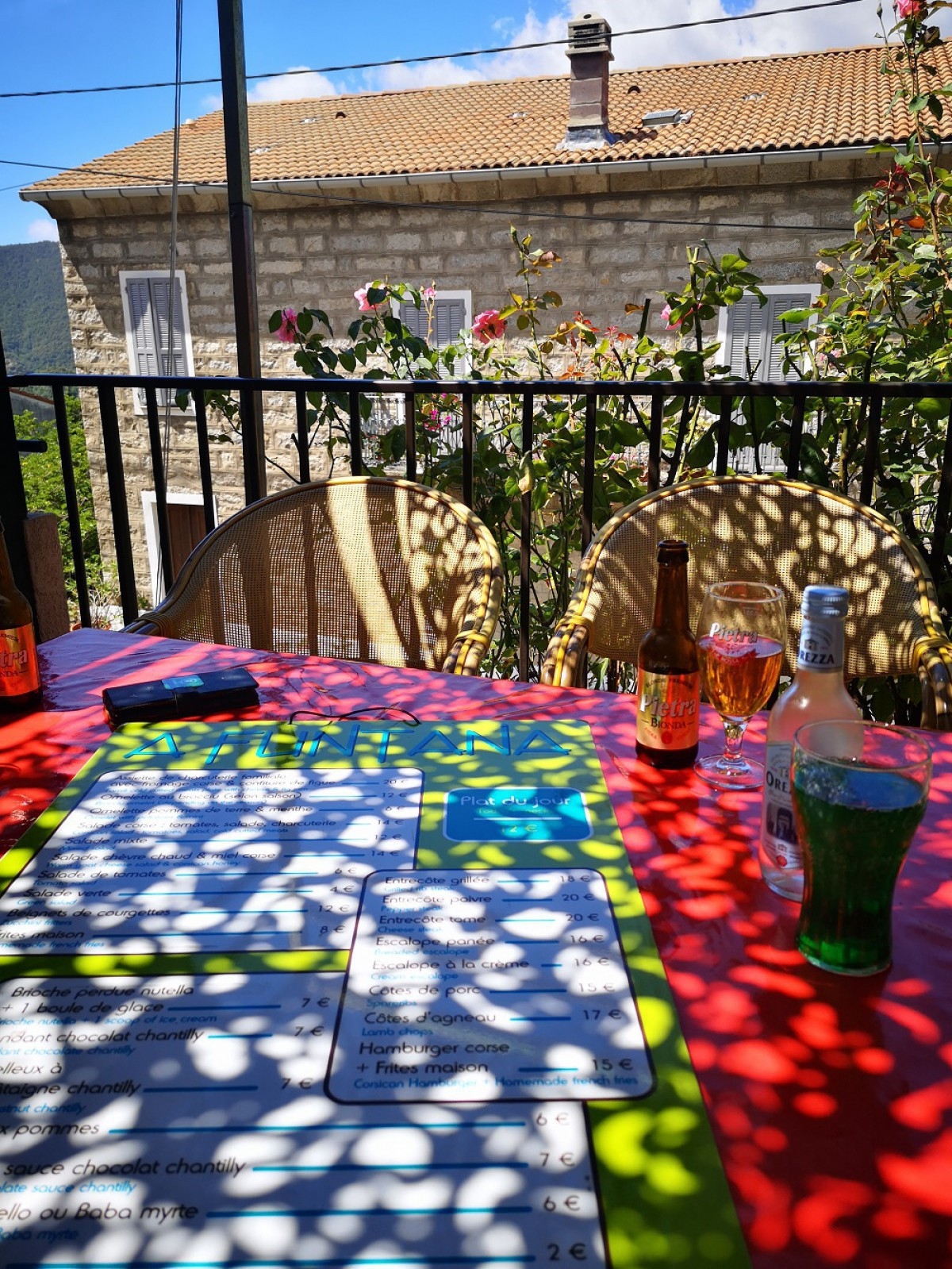 For those who wish to stop sleeping here there are several accommodations, including the Hotel ** du Tourisme which has a Bosch charging station for electric bikes.

Points of interest for tourists in this stage: The Marmanu Forest, the Verde Pass (direct connection point with the GR20), Cozzano and Zicavo